For many years Ron Brockless was at the heart of Tolworth YBC. He was loved by the children and parents alike. He was a talented instructor who was quick to spot anyone doing something wrong whilst bowling, a lovely kind person with the kids (he was a great Santa at our Christmas parties) and always happy.

Not only was he great with the kids, he had that special talent of being perfectly at home running events and being on the PA system at the same time. Many of us oldies will remember Ron running the Christmas Bowling events (one for the Juniors and another through the night for the adults) with coloured head pins and prizes. One year I arrived home at 7 am in the morning having won the final turkey that year in the 5 am squad having had 8 hours of bowling fun!

Tracy reminded me about the fabulous Christmas Grottos created each year in the bar – with Ron at the heart of each one as Father Christmas. There would be presents and time for every youngster to have a special time with Ron. It was never rushed and always exactly suited to the person – which made it so special. For the little ones, he was quite happy for them to sit on his knee – something that made them feel SPECIAL as a little person.

Ron could have created a book on how to encourage children. There were so many things he did naturally without thinking but were just the right thing to do. A classic example was for the Peewees he would allow some of the better bowlers to join the older bowlers towards the end of their practice session. It was a treasured treat which gave the Peewees a new target,  built links between the older bowlers and our very  young bowlers and passed on the message of how Tolworth Bowlers were expected to behave on the lanes.

On his 70th birthday, a party was arranged for him at the bowl. The two photos below show him enjoying the party and his cake. 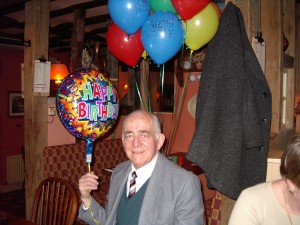 Ron at his 70th Birthday Party 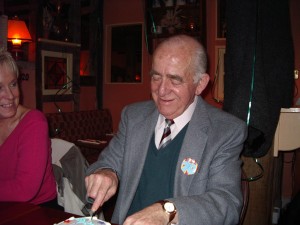 As an instructor, Ron had a number of signature catch phrases but one of the most memorable was “Are you a chucker or a BOWLER” which came out whenever he saw a person hurling the ball down the lane rather than rolling it down the lane as they had been taught.

The YBC in the late nineties with Ron in the centre

I know when I started on the route to becoming a qualified instructor in 2001, Ron was full of advice and encouragement which enabled me to pass the exams first time and then be able to apply my knowledge of bowling gained over many years for the benefit of the kids.

In writtng this article, I found this lovely tribute to Ron from another YBC instructor – Pat Harries.

Ron has been Chairman of Tolworth YBC for many years and has steered his YBC through good times and bad with enthusiasm and commitment – and of course voluntarily.

He and I have spent many long hours “chewing the fat”, reminiscing on the past, discussing the way forward for the sport of tenpin bowling, and I will miss very much his tireless enthusiasm and genuine love of our sport.

There are not enough adjectives in the English language that will cover Ron’s life in tenpin bowling, which must cover almost 40 years. He has been involved in almost every aspect of the sport from managing a bowl, running tournaments, fundraising, and those magical Christmas fun bowls with coloured pins and turkeys to be won, bowling at a very respectable level himself and instructing – his great love. Many of the youngsters he instructed are now parents and he has instructed their sons and daughters.

The Tolworth Juniors in particular will be totally lost without their RON. He was always there for them – any time – all the time. He accompanied them to the Junior Nationals every year. He trained them to perform well – not only on the lanes but off.

The kids adored him – and the parents respected him. What more could you possibly ask for but LOVE and RESPECT.

The following year the Ron Brockless Trophy was introduced as a perpetual award for Pee Wee bowlers to celebrate a bowler who had achieved a lot in the year. The winner receives a small shield as memento of the award that year whilst their name is added to the shield. 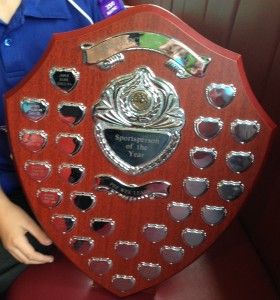 Winner of the shield have been:-

All of these bowlers were Pee Wees at the time and many have gone on to be leading bowlers in their age group.