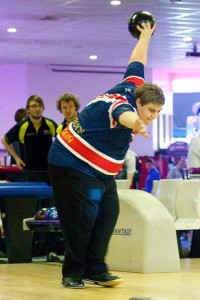 I am sure by now most people know Andrew died in his sleep early on Friday 1st May 2015. We now know that he died from a restricted flow of blood to the left side of his heart.

We miss him dearly  – “that guy with the high backswing” – that he demonstrated with the BUCS team that went to the USA as well as with YBC, YACS and Portsmouth University.

He was so proud of the BUCS team and the shirts he managed to create using the Union flag as the base. These shirts carried support for Cancer Research UK – a charity that Andrew took to heart at that time. Most BUCS tournaments where Andrew bowled had the essential ingredient of a cake sale for Cancer Research. Every time we thought there is just too many this time …. but none ever came back.

I have loaded a selection of photos taken during the Peeky Memorial Tournament here. 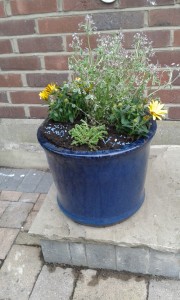 Yvonne and a friend have created a little reminder about Andrew on our doorstep in the colours for his favorite football team – Chelsea. It is flourishing as we knew it would under Andrew’s watchful eye.

On top of Chelsea, cars and bowling, Andrew was passionate about Help For Heros and what these people have given up for our country – please help us to make a worthwhile contribution to this great charity in recognition of the fun and help Andrew gave everyone. Yvonne has set up more details on the Just Giving site but like all the family is still struggling to come to terms with a great hole in our life.

We are absolutely amazed by the amount that has been donated to the Help For Heroes (it has reached £4532 by the 8th September, £1614 raised through the PEEKY Memorial Tournament  with a further £340 already added by a group of friends who are doing the Tougher Mudder charity event in September). We are getting great comfort from the many lovely comments people are leaving with donations (as well as those on Facebook). With what has been donated already, the events planned for this year and promises for the near future (not everyone has a computer!!!) we believe there will be a lasting legacy from Andrew’s sudden death.

We have now created a page collecting  the tributes to Andrew in one place. Click here to view the collection so far.

Thank you to all who attended the Service in Memory of Andrew at Randalls Park. Much as we tried to speak to everyone after the service, we are sorry if we missed you or you were not aware there was a further celebration after the service at Horton Park Golf Club. We were moved by everyone who came – despite distances or work / personal commitments and that everyone managed to be under cover when it started raining. Our family are glad that everyone found it a very moving service – we wanted a happy memory of everything Andrew had achieved and have loaded a copy of the service here.

The day was made extra special by finding out the day before that our driver would be Chris Knight – one of my team mates on a Wednesday night. Then on the return to Horton Park there was the flash of lighting followed by a enormous crash of thunder – nearly everyone seems to have the same thought; it was Andrew rolling the last ball of a 300 game and the ball smashing into the pins. A final beautiful touch was the photo album with pictures and related messages from all his friends. It is a magnificent record that must have taken a superhuman effort to create in such a short time. It will be treasured forever.

The Peek Family want to say thank you for all the support from everyone  – friends, everyone at Tolworth YBC, all the people who have helped support us at the Nationals and at the Service at Randalls Park. We knew our Andrew – Andy or Peeky to everyone else – was well known and popular but even we have been amazed by who knew him.

I have created a collection of photos from the web of Andrew (and hope everyone is happy with me using them) plus others we have as we find interesting ones. As many people have noted, it is almost impossible to find a photo of Andrew where there is not a smile of some description creeping out.

Some memories of Andrew 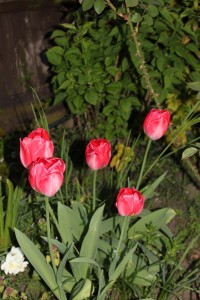 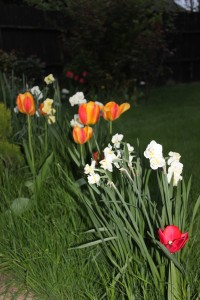 Andrew followed his football team (Chelsea) and took the opportunity to take his car abroad (to Amsterdam) with friends. He had a great time and arrived back with three brown bags for us with instructions to plant in the garden. This is part of the memory we see from the kitchen. 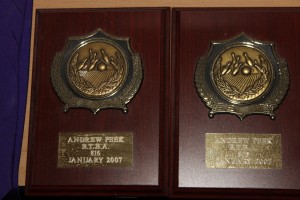 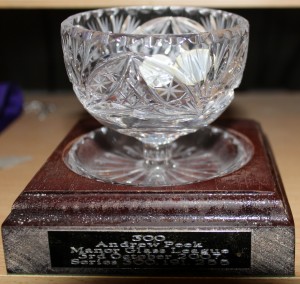 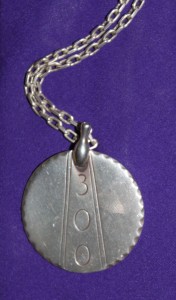 For a number of years, Andrew had got close to a perfect game but putting in high series both in leagues and tournaments.

He seemed to come off the boil when I managed my 300 after many years in bowling but in January 2007 he put in two high series for which he gained two BTBA plaques. The first was a 816 in the Surrey Area trials at Purley followed up a couple of weeks later with a 806 in the Manor Glass League.

It was not until October 2007 he managed the perfect game and received a certificate. The pendent was made to mark the occasion and he wore it with pride every day. A little trophy with the scores was also created as a reminder on our mantelpiece.

There is a recent Surrey Area BTBA  Facebook  tribute to Andrew’s bowling career …. a big thank you whoever wrote it. 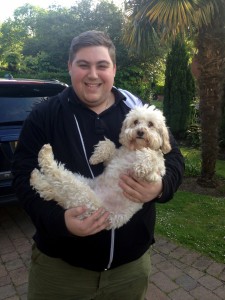 Andrew knew that Yvonne would love Lily if only he could get her home. Captured on film was one of his attempts a dognapping.

Sadly after he died, Lily did get to meet Yvonne at our home 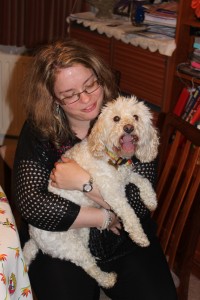 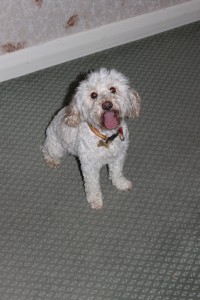 Getting a Strike the Peeky way.  Give yourself room to hook the ball, get a high backswing, lift hard on the down swing to launch the ball down the lane and watch the pins give up fighting the incoming ball.

These pictures were taken after Andrew had broken his collar bone and show the slightly restricted high backswing; earlier pictures of him showed an even higher backswing which gave him the ability to generate high ball revolutions whilst keeping it on track to the pins.

Andrew had many memorable coaching sessions with Andy Penny on the CATS lane at Dunstable. In one session, Andy P asked Andrew to bowl over 1st arrow. The ball went through the arrow and continued towards the edge of the lane. We all waited for it to drop into the gutter but instead it flew off the edge for a devastating strike. When Andy P checked the CATS computer, the ball had been 0.39 inch from the edge of the lane. The second attempt gave a ball 0.41 inch of the lane edge and another strike.  “I think we will try something different” was Andy Penny’s comment after that second ball. To see the paths – click here.

Shots 6 and 7 went over 1st arrow and kissed the edge of the lane. The going elsewhere took shots 8 to 10 just 1 floor board left at first arrow but at a flatter angle and a little less speed  which gave the ball more room further down the lane.  That was an interesting session!

BUCS In The USA

The BUCS University Team with ex-students on right 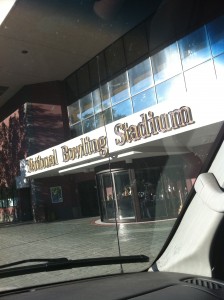 The shirts worn by the University students were designed for the trip with names on the back within the Union flag. The teams came out as a parade from the back of the lanes to their respective lanes. Later when the teams were introduced, the National Anthem was played.

The centre was massive – there were at least two machines to dress the lanes. The grey area between the lanes in the left hand part of the composite picture is a 3 lane wide walkway to the back of the lanes and the players changing rooms.

The centre had an interactive video system that enabled someone to watch a selcted pair of lanes with re-freshes every 5 seconds. This view is from the grandstands which were packed during bowling. 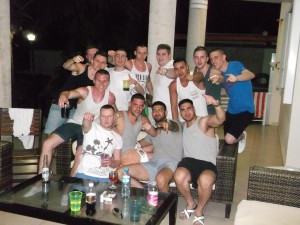 In 2013, Andrew and friends hired a Villa in Cancun. By all accounts they had the time of their lives and a villa with a great sea view as well – and yes that is the view from one of the bedrooms with the sea beyond the pool. 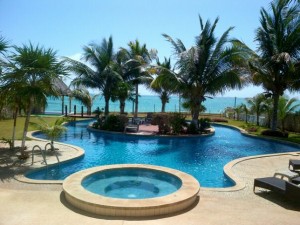 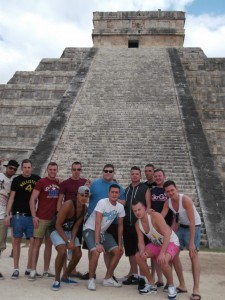 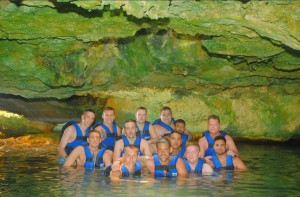 The Villa was shear luxury with most rooms en-suite and sea views.

They travelled to see the famous sites and partied on the beach – a holiday to remember by all. Andrew came home bubbling over with the experiences they had shared together in Mexico. 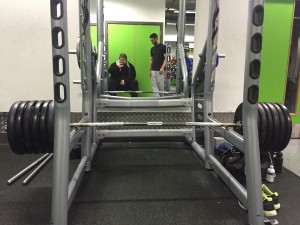 Andrew became great friends with a personal trainer who was setting up his own gym in Sutton. Besides using the facilities, Andrew and Keiran spent time looking for new equipment and watching competitions. 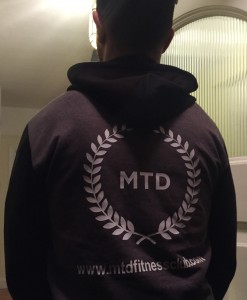 To create the right image, Andrew  put his previous shirt designing knowledge to use again to create a Gym logo. 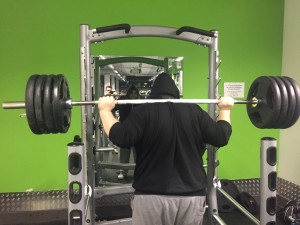 In 2009 the whole extended family spent a day at Diggerlend. Andrew was happy to explore all attractions and encourage Yvonne to join him in the scoop of the big digger and to be spun round.

However the big attraction was racing in the hydraulic mud buggies. In the end both Yvonne and Andrew were the clear winners over us oldies.

The tournament at Tolworth has been a great success with all but the first and last squad full. This was despite the Counties taking place the following day. Each entry included a £5 donation to Help For Heroes. It’s another BIG THANK YOU to those who made the effort to put the event together in his name – lit was a great celebration of what he achieved in the time he was with us.

A BIG THANK YOU to everyone who is helping us to leave a lasting legacy through a donation to the Help For Heroes via the Just Giving link.  We very much appreciate everyone who has left left messages and their thoughts – we have read them all and are getting comfort from the memories people have of Andrew.

I know this is the Tolworth YBC website but I am sure no one will object if you share your memories of Andrew here.